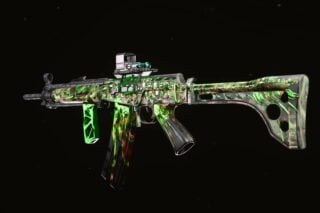 In this guide to the best Warzone loadout for Season 3, we’ll help you build the best classes for Cold War and Call of Duty’s battle royale.
Following the deployment of the Call of Duty: Warzone Season 3 update, a lot of the shooter’s guns have been improved, giving players a better selection of options for their loadout. There are now almost 100 guns in the game, which can seem quite daunting at first.
However, a smaller number of weapons are considered ‘meta’ at any given time, and our best Warzone loadout guide will help you choose which is right for your playstyle.
The guns listed below aren’t necessarily the most used in Warzone, but they’re definitely the most effective weapons in Season 3 that will help you win Warzone matches.
Our guide breaks down the best weapons in Season 3, including assault rifles, snipers, SMGs and more. In total, there are 12 meta guns currently, and you should choose which ones to include in your loadout based on how you play – up close, long-range, or in between.
Here’s our list of the best guns in Warzone Season 3, along with recommended builds for each.

The CR-56 AMAX is still in our best Warzone loadout list.
In Season 3, Warzone gunfights stilll take place at medium to long-range, so you’ll want an effective assault rifle to use. The CR-56 AMAX remains a great choice thanks to its high damage and range, allowing players to pick off fully armoured enemies in less than eight shots, depending on where they land. Thankfully, the AMAX has not been nerfed following the recent Season 3 update, though Raven explains it is “keeping a close eye on” it.
The beauty of this assault rifle is that it has one of the best “time to kill” (TTK) for its type. It’s not the easiest gun to wield due to moderate recoil, but this can be managed by the attachments we’ve detailed here.

Cold War’s AK-47 has received a welcome buff and joins our best Warzone loadout.
One of the biggest surprises of the Season 3 Warzone update was the buff to the Cold War AK-47. Previously, the weapon was practically unusable due to its high recoil, but Raven has rebalanced to make it much more viable now. The weapon always had a great TTK, but because of its high recoil was never recommended. Now that its recoil has been reduced substantially, it has found its place in the meta.
It has a slow rate of fire, meaning you’ll have an easier time staying on target. Just be aware that its slow rate of fire won’t be ideal for close quarters engagements, though it’s worth mentioning that Cold War weapons tend to give you better mobility, so it has that going for it. Overall, this feels a lot like the AMAX, with slight alterations such as its rate of fire and movement speeds.
For more suggestions on how to build your weapon, read our Warzone best AK-47 loadout guide.

The FARA 83 shines at medium to long range.
Much like the Cold War AK-47, Raven has repurposed the FARA 83, making it a viable weapon now. Its recoil pattern has been adjusted, and its minimum damage range has been increased, along with its maximum damage range, and you’ll definitely be able to tell a difference following the Season 3 update. Typically, this weapon shines at medium to long range, so you’ll want to build it to better suit those engagements.
One of the weapon’s most noticeable downsides are its slow reload times, so you’ll want to utilize an ammo type that works for your play style. The Spetsnaz 50 Rnd (which is actually 60 rounds due to a typo on the attachment name), is excellent for those long range engagements, allowing you to pull back and take cover to reload.
For more suggestions on how to build your weapon, read our Warzone best FARA 83 loadout guide.

Kar is a mainstay in our best Warzone loadout list.
Verdansk 84 may be a bit more dense with cover than before, but you’ll still want to consider a rifle for picking off oponents at long range. In Season 3, the best option for this remains the Kar98k, the marksman rifle that has great mobility, high damage and fast aim down sights (ADS) speeds.
As usual, this type of weapon is best combined with an SMG for close combat encounters. The Kar98k isn’t as effective for very long range scenarios, which would be better suited for a sniper, but it remains the best fast-paced option for around 100m or less, with the ability to eliminate enemies in a single shot to the head (and crack shields with a body blow).
For more suggestions on how to build your weapon, read our Warzone best sniper loadout guide.

The Stoner still packs a punch.
Light machine guns (LMGs) aren’t used that often in Warzone, mostly due to their slow mobility and ADS speeds, which put players at a big disadvantage when faced with players using lighter guns.
However, the Stoner 63 is still a great choice thanks to its minimal recoil, excellent damage and high range. It’s still slow, but you’ll have the upper hand in many situations when you’re using this weapon.
The build above is a hybrid of medium and long-range builds, making it great for many situations. While using the Stoner 63, it’s best to play to its strengths, so we recommend using this build at range, thus avoiding some of the downsides that come with an LMG.
For more suggestions on how to build your weapon, read our Warzone best Stoner 63 loadout guide.

Despite a slight nerf, the M16 still shreds.
While the M16 was arguably broken in the previous seasons due to its damage output and bullet velocity, it still feels viable as part of the Season 3 meta. Raven lowered the time between shots with each burst, but even with this nerf, you’ll still shred with this weapon if you know how to use it. The build is relatively the same as it was before, only the Strike Team Barrel is swapped for the Task Force, which improves your bullet velocity.
You’ll want to treat this weapon sort of like a sniper, but with a little more forgiveness since you’ve got three shots to deal with instead of one. If you hit an opponent in the head, you can take them down in just two bursts. This won’t be the norm, as your weapon will bounce up as each shot comes out, but even at three to four bursts to make an elimination, the M16 is still one of the best choices in the entire game.

FFAR is still viable and has a competitive TTK.
As part of the Season 3 update, Raven nerfed the FFAR 1 substantially. In short, its overall damage was decreased slightly, and its ADS speed was slowed. Despite this, the weapon is still viable and has a competitive TTK. You’ll just notice that it won’t dominate the playing field as it once did, due to its slower ADS speed and decreased TTK.
The best way to run the FFAR 1 is as a sniper compliment, as it works well in close to medium range engagements. The build above is for using the weapon more like an SMG, which prioritizes its ADS speeds and movement. Though, you can also deck it out to be effective at medium range, as well. In short, you shouldn’t expect to wipe the floor with the competition while using this weapon now, but it remains a top tier choice.

RAM-7 excels up close and at medium range.
Now that a lot of weapons have been rebalanced, the RAM-7 can sit comfortably at the top of the Warzone meta, thanks to its reliable TTK and ability to excel up close and at medium range. With this build, you’ll want to almost use it like an SMG, but since it’s an assault rifle, it’ll still work at medium to even certain long range scenarios.
This works great as a sniper support weapon, though you won’t have the added benefits you’d get with an SMG’s mobility, due to it being an assault rifle. Still, it has great TTKs at multiple ranges, has clean iron sights, and is relatively manageable to control.

It’s the return of the MAC.
Even though Raven slightly nerfed the MAC-10’s maximum damage range, it still remains a top tier SMG, dominating the playing field from close to medium range. Now that the meta has a lot more options, you’ll likely see fewer players using the MAC-10, but that doesn’t mean you should skip out on it.
This SMG has a fast rate of fire, excellent range, and gives you plenty of mobility to run around while dodging your opponent’s shots. The beauty of the MAC-10 is that there are a slew of attachment options that are viable, but we like to preserve mobility as much as possible since this is one of the weapon’s strengths. Though, you can also deck it out to excel at medium range by swapping the Tiger Team Spotlight Laser for the 5.9” Task Force Barrel.
For more suggestions on how to build your weapon, read our Warzone best SMG loadout guide.

The Bullfrog is a much more attractive option in Season 3.
The Bullfrog was always good, but was previously outclassed by the FFAR. Now that the FFAR has been nerfed, the Bullfrog is a much more attractive SMG to use at close to medium range. With this particular build, you’ll be able to use this at medium range while preserving your ADS speeds, and movement. Some players like the Bullfrog’s iron sights, so if you fall into that category, you should use a Rear Grip to improve ADS speeds, or an Underbarrel to improve recoil control.
The most appealing thing about the Bullfrog is that it has a competitive TTK, high accuracy, high mag count, and allows you to move around quickly since it’s an SMG. You can experiment with some of the attachments depending on your play style, but in general, the build above is highly recommended.
For more suggestions on how to build your weapon, read our Warzone best Bullfrog loadout guide.

Thankfully, the HDR wasn’t touched following the Season 3 update and it remains the best option for sniper who players who want to stalk their targets and take slow, deliberate shots. Thanks to its high damage, managable ADS speed and fantastic bullet velocity, HDR is perfect for taking out enemies who are half way across the map.
Many players prefer the Kar98k due to the fact it’s much faster, but it can’t match HDR for longer range encounters – and its faster bullet velocity means you won’t have to adjust your shots the same way.
For more suggestions on how to build your weapon, read our Warzone best sniper loadout guide.

The Tundra has an even faster bullet velocity than the HDR, which means you can bullseye targets from great distances without having to lead your shots so much. The negative is that the ADS time is far worse, and that’s where the choice between the two is made.
One crucial point is that you can attach the Royal Kross 4x scope to Tundra, which grants plenty of magnification, without a sniper glint. Even if its ADS speeds are painfully slow, this makes this rifle a very viable option for sneaky snipers.
You must log in or register to reply here.
Share:
Facebook Twitter Reddit Pinterest Tumblr WhatsApp Email Share Link
Menu
Log in
Register
Install the app
Top