Here's when the RTX GPUs will be in stock, according to our original reporting. We'll send you an alert when they're in stock. 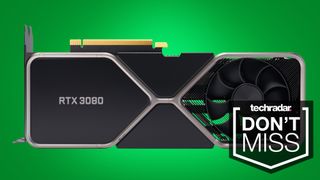 Finding the RTX 3080 and RTX 3080Ti in stock today is going to get a little easier and it won't be alone: the RTX 3070, RTX 3090 and RTX 3060 will also be available to buy too from multiple stores. Meanwhile, the new RTX 3070 Ti may be in stock tomorrow, according to a now-deleted tweet from Newegg.

Multiple retailers, according to our exclusive reporting from retail sources, today, June 9 and tomorrow will be when to get RTX graphics cards, and our GPU Twitter tracker Matt Swider will send you an alert – if you follow his Twitter account and turn on notifications.
Trust factor: In addition to helping 39,000 people get next-gen consoles through his Xbox and PS5 restock alerts, Matt is tracking GPU stock in the US. Here's what we expect to see today and tomorrow from multiple American retailers:
The RTX 3070 Ti is going to be in stock in the US for the first time tomorrow, June 10, according to Newegg, or at least that's what we can gather from their official Twitter account's now-deleted tweet.
We're going to see plenty of other GPU stock this morning, including the still-hard-to-find Nvidia RTX 3080.

(Image credit: Twitter / Newegg)
Here are the places to check for RTX GPU inventory:
Newegg: The Newegg Shuffle is about to go live with the RTX 3080, RTX 3080 Ti, RTX 3090, RTX 3060. There are also two non-Nvidia graphics cards from AMD: RX 6700 and RX 6900.
For tomorrow, Newegg sent out a now-deleted tweet that mentioned that the RTX 3070 Ti from Nvidia will be available as part of its Newegg Shuffle (lottery) at 6am PDT to 10am PDT (so 9am EDT to 1pm PDT). That's a long four-hour window (longer than many other Newegg Shuffle opportunities). The retailer did the same on the launch day of the RTX 3080 Ti when that GPU launched last week.

Here's the deal: while Nvidia said 'today' we think it meant Thursday, June 10, and that's why the tweet is deleted. We'll send out an alert as soon as there's stock of the RTX 3070 Ti GPU.
Antonline: Antonline often has RTX graphics cards in stock and pairs them with other components (just like Newegg does). So you'll also be buying a motherboard, or case or something else with it. The difference with Antonline is that it's first-come-first-serve (vs Newegg's lottery), so if you're fast enough, this is the one to watch.
Best Buy: Best Buy often has the Nvidia RTX GPUs at their normal MSRP online, and we've seen people wait nearly 20 hours in line when it's an in-store restock (see our RTX 3080 Ti launch line coverage). Because the RTX cards from Best Buy aren't part of a bundle and because they're at retail price, they last less than a minute in some cases and we advise people to keep trying until they're totally sold out.
You must log in or register to reply here.
Share:
Facebook Twitter Reddit Pinterest Tumblr WhatsApp Email Share Link
Menu
Log in
Register
Install the app
Top