In this Resident Evil 8 walkthrough, we’ll help you collect every item — like ammo, lei, rusted scrap, herbs, crystal fragments, and more — and find every key item with our maps and screenshots.

Look for Rose in the castle​ 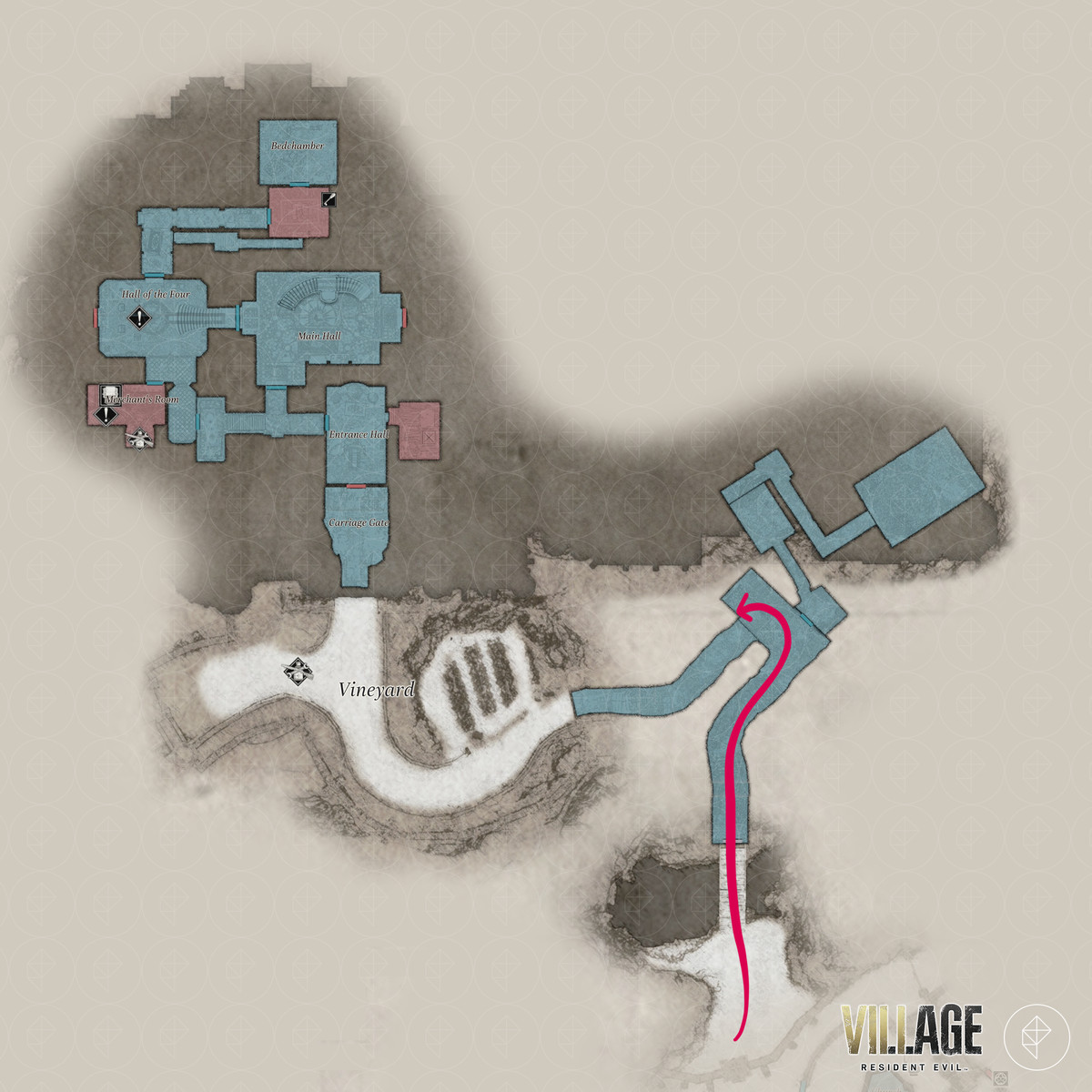 Graphic: Jeffrey Parkin | Sources: Capcom via Polygon
Once you open the castle gate, head through and across the bridge. Continue through the tunnel and into a wine cellar. Interact with the switch next to the gate. It doesn’t go well. 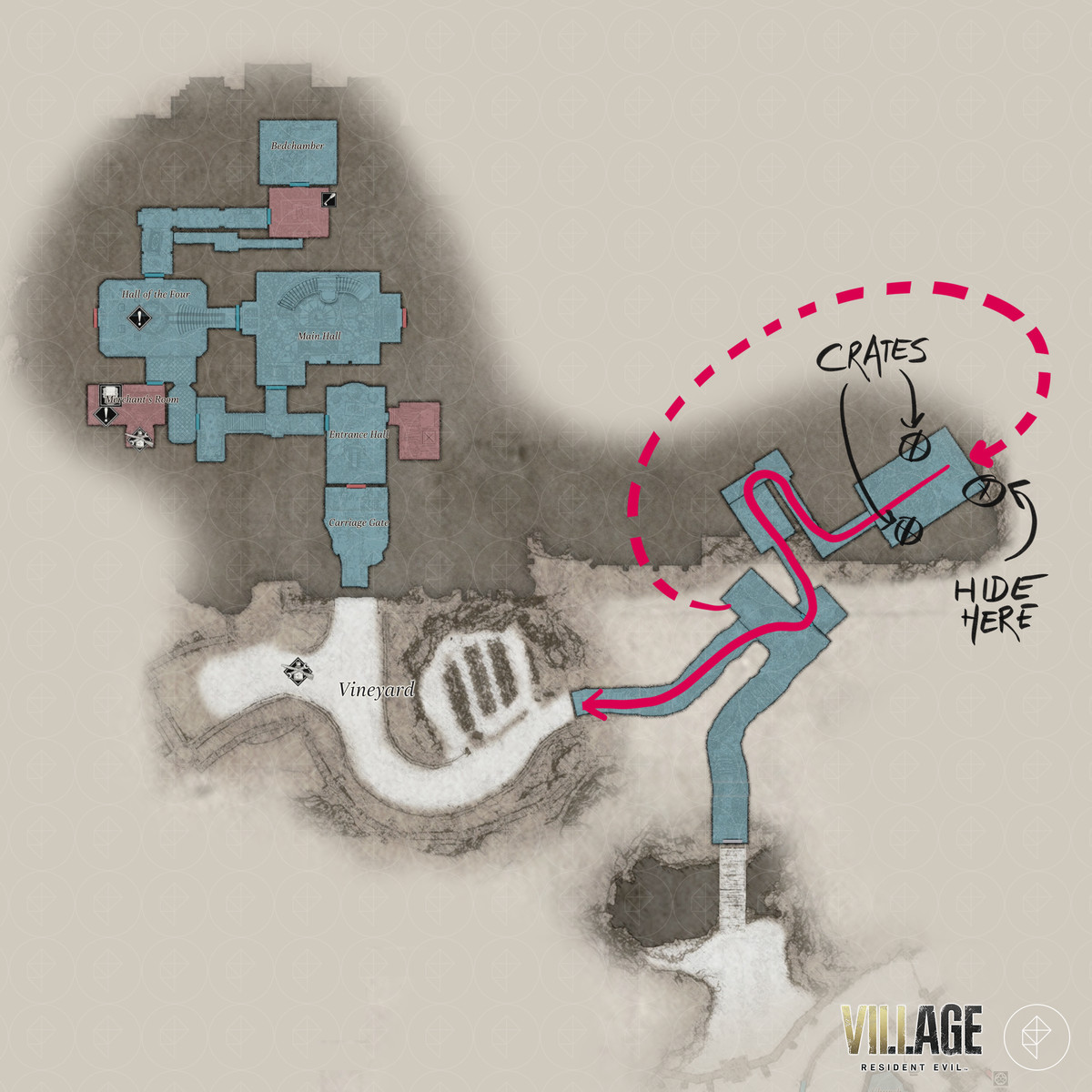 Graphic: Jeffrey Parkin | Sources: Capcom via Polygon
Well, now you’re running for your life. Follow the only tunnel you have. Take the first left and kick through the boards. Keep running straight.


After the cutscene, look for another set of breakable boards and duck through. Follow the tunnel up.


In the next open area, there are two crates. Ignore them, and turn left. There’s a tiny alcove in the back left corner. Squeeze in there.


Duck under the spinning death spikes and go collect the lei and handgun ammo from the smashed crates.


Follow the hallway out until you get back to the switch that started this whole thing. Go through the doors and out to the Vineyard. 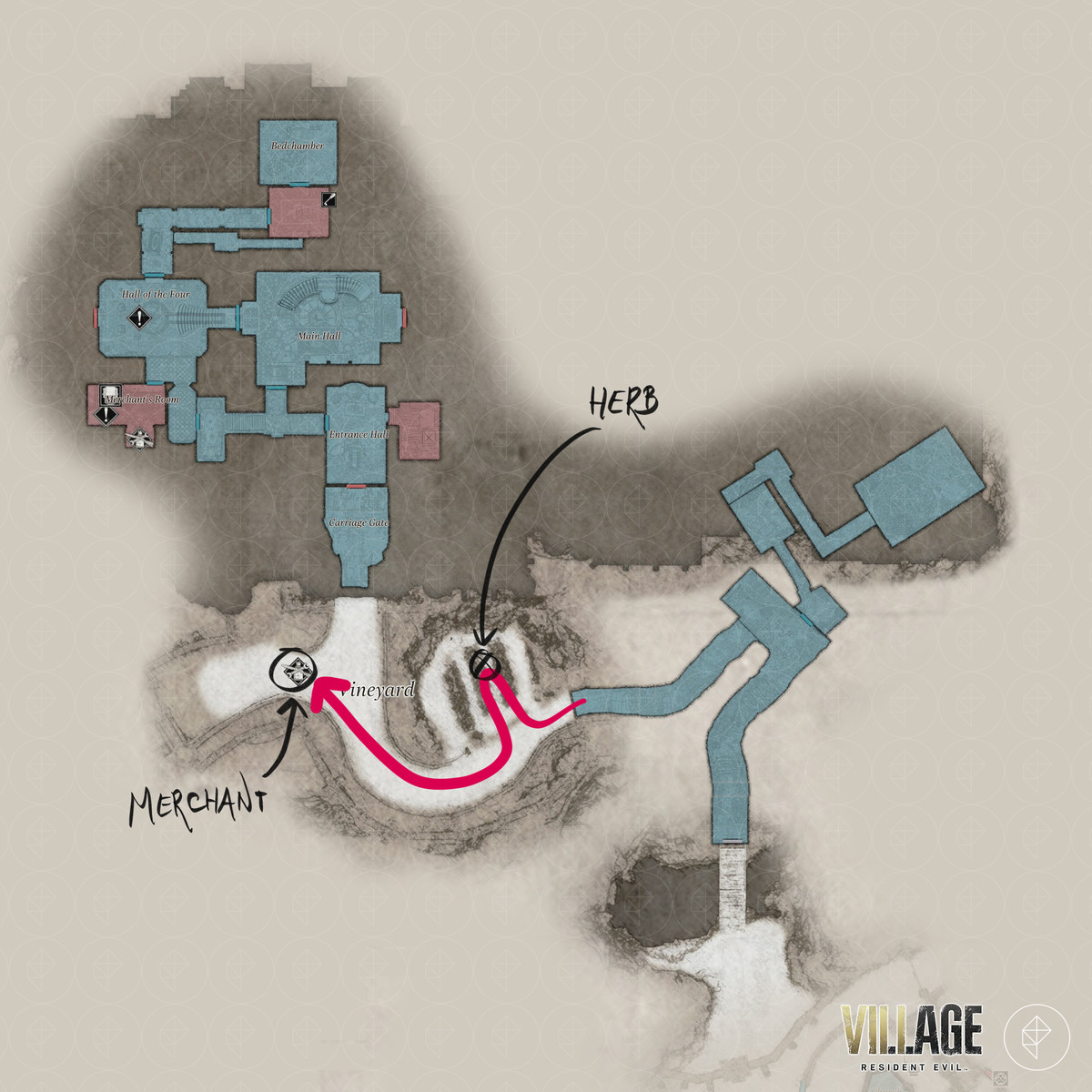 Graphic: Jeffrey Parkin | Sources: Capcom via Polygon
Take a right into the Vineyard, and grab the herb from the middle row of vines. From that herb, look northwest. 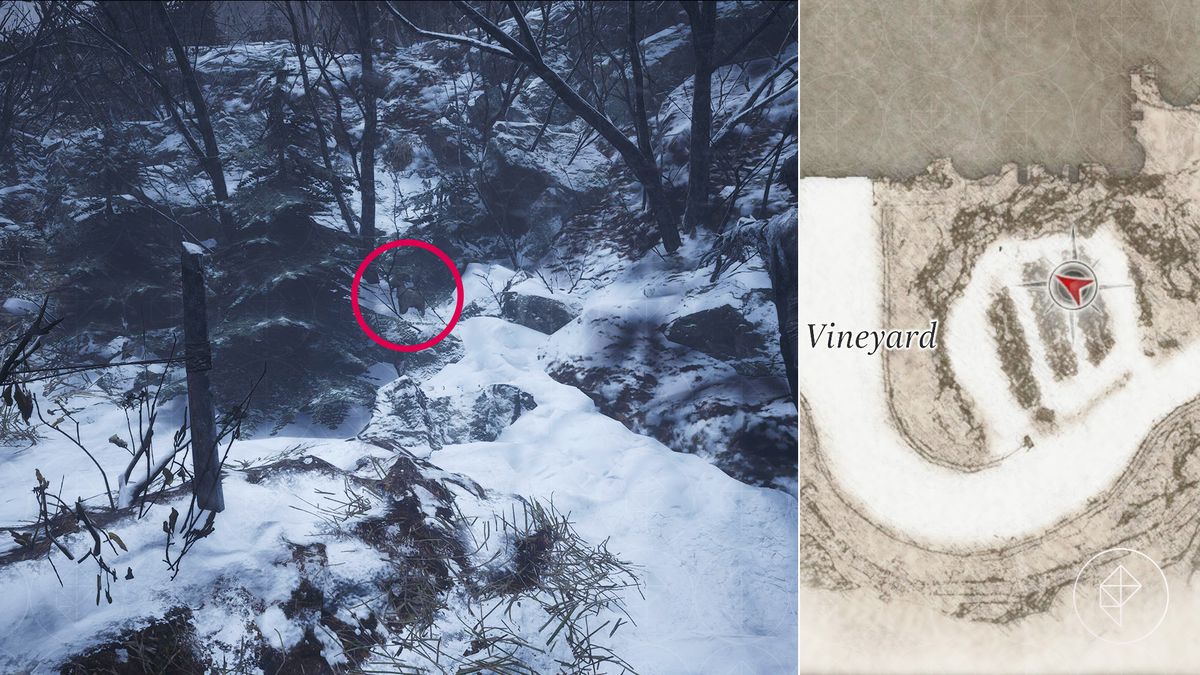 A Vineyard Goat of Warding so hidden that we had to circle it. Graphic: Dave Tach/Polygon | Source images: Capcom via Polygon
There’s a Goat of Warding on the edge of the Vineyard on the rocks.


At the top of the hill, you’ll meet the Duke, a weapons, ammo, and items merchant.


Feel free to sell anything with “(Valuable)” in the description — like the two crystal fragments you found earlier.


Your best bet right now, depending on how much lei you have (we had just shy of 7,000 lei), is a power upgrade to your pistol. Stock up on whatever else you need, and then continue along the path. You’ll pass through the Carriage Gate and into Castle Dimitrescu. 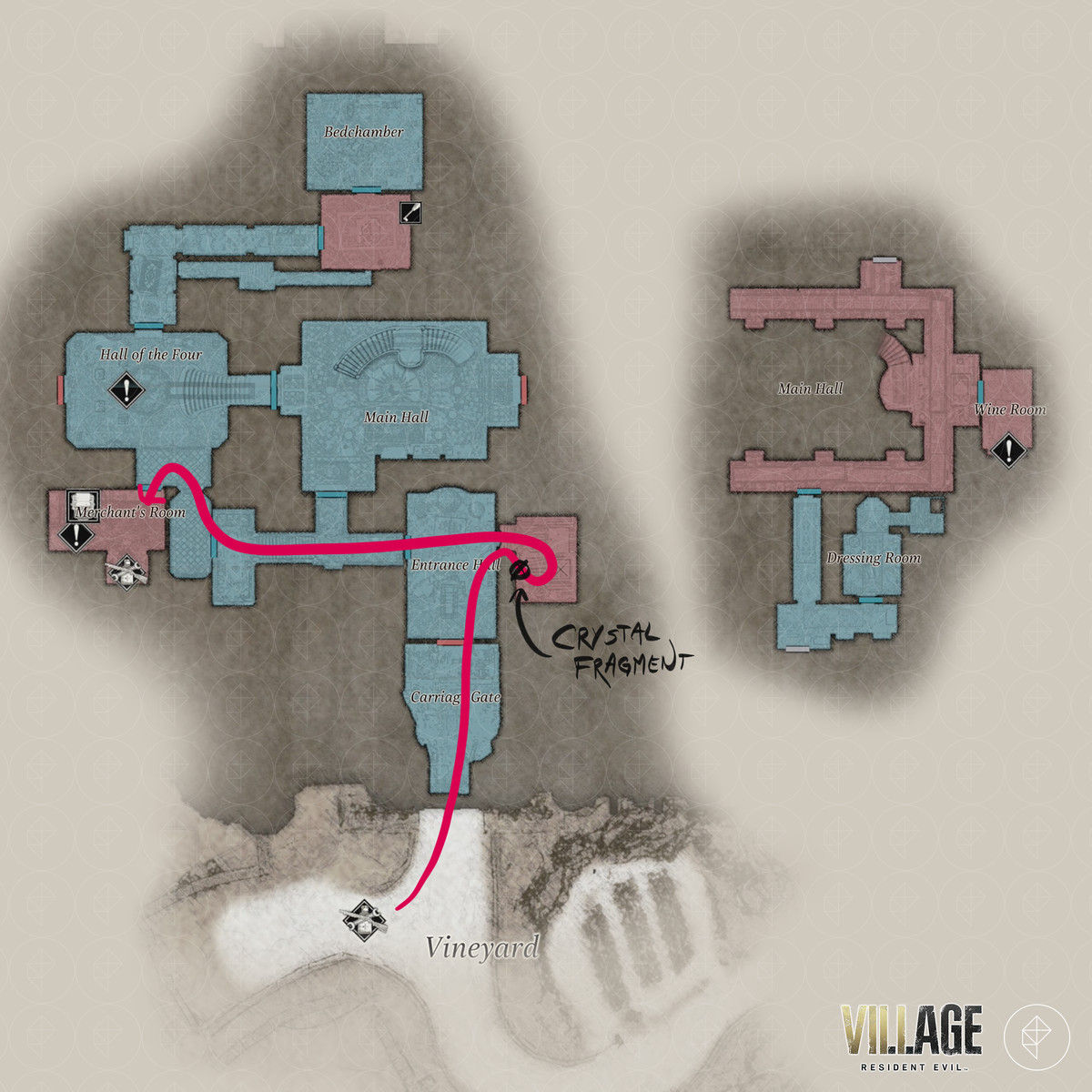 Graphic: Jeffrey Parkin | Sources: Capcom via Polygon
In the Entrance Hall, climb the stairs and break the vase on your left for some handgun ammo. Pass the door on the left, and check the table for a file — the castle’s Guest Book.


On the right side, smash the glass on the cabinet to find some gunpowder. Go through the door on the right (east) side to find a machinery room. 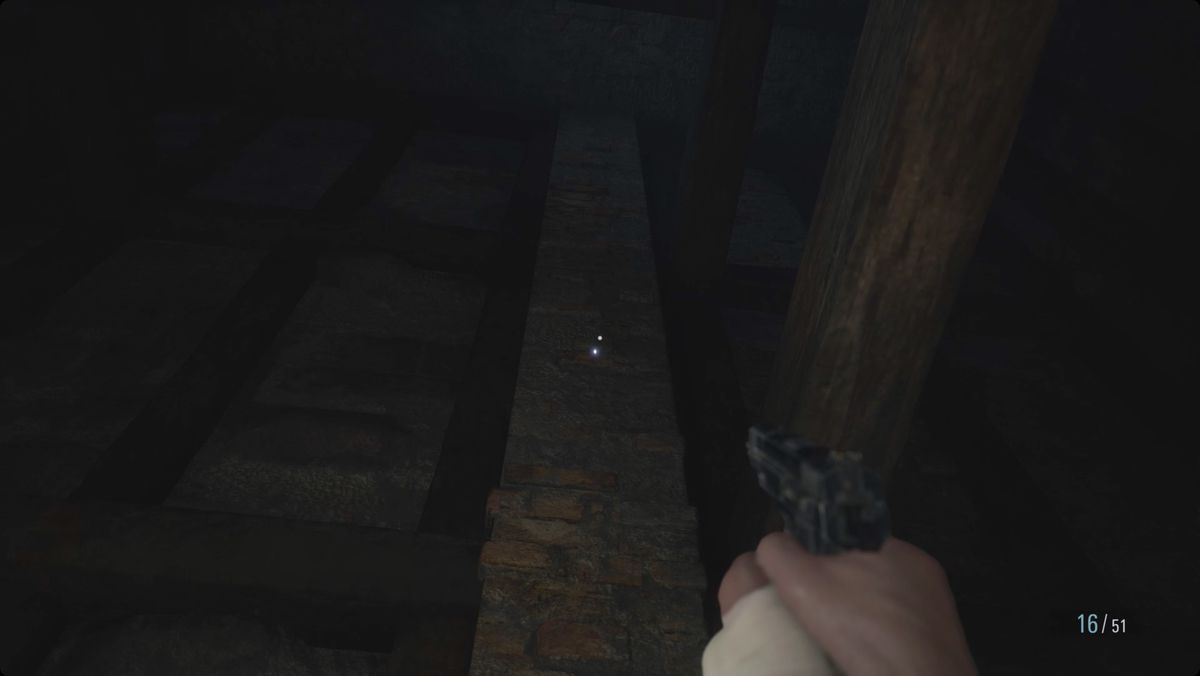 Image: Capcom via Polygon
Grab the lei from the box, and try the elevator button — it won’t work. Put your back to the elevator and face the wall (west). Follow the column up and shoot down the glimmering fragment crystal.


Head through the door on the left (west) side of the Entrance Hall.


Hall of the Four​

Follow the hallway to the bottom of the stairs. Smash the vase for some lei, and then go through the door.

In the Hall of the Four, turn left to enter the Merchant’s Room.

Stop at the typewriter, and then check out the model of Castle Dimitrescu. There’s a file — Norshteyn’s Labyrinths — to the left. The model is a puzzle we’ll come back to later.


Head back into the Hall of the Four and examine the door on your left. You’ll make some new friends. 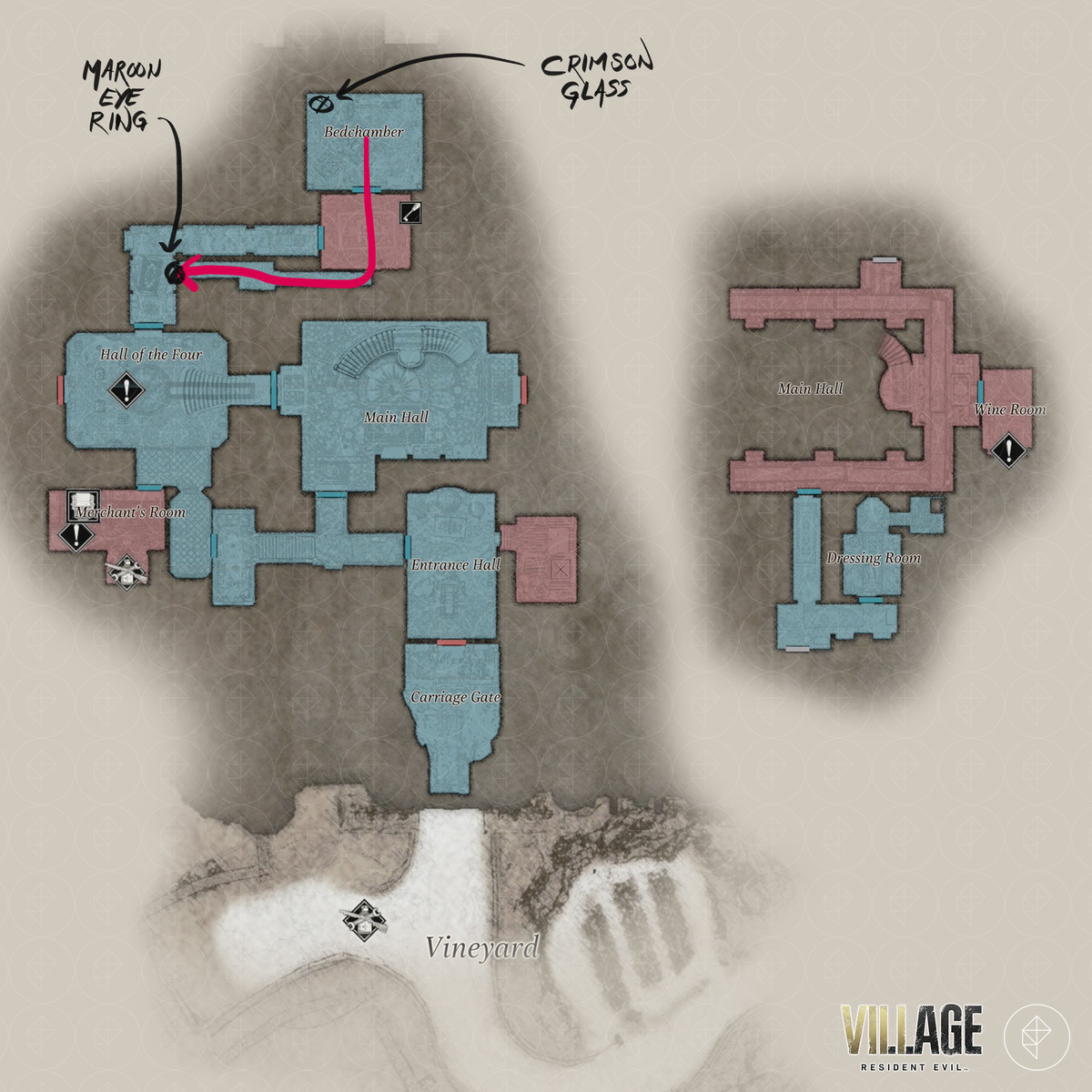 Graphic: Jeffrey Parkin | Sources: Capcom via Polygon
When you regain control, look at your hands to free yourself. To the left of the fireplace, grab the Crimson Glass, and then head out the door.

There’s an easy-to-pick lock on your left and a painting to check out on your right. The door to the right is locked, so go examine the fireplace.


On the other side of the tunnel, turn left for some rusted scrap. At the end of the hall, grab the Maroon Eye Ring from the statue to open the door. In your inventory, tab over to key items, and examine the ring. Turn it to look at the gem, and examine it again to get the Maroon Eye.


Squeeze through the door. 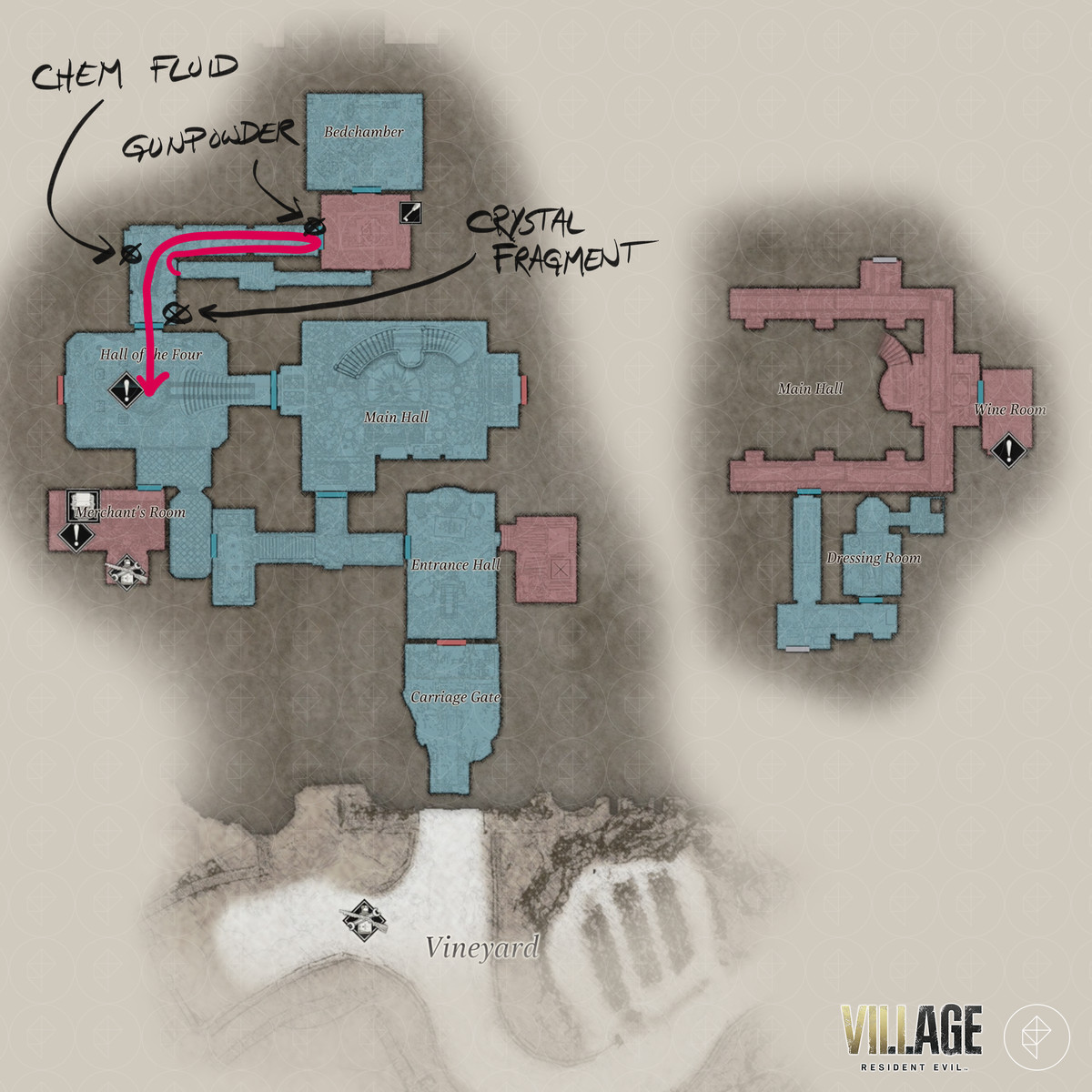 Graphic: Jeffrey Parkin | Sources: Capcom via Polygon
Check the drawer next to the suit of armor ahead of you for chem fluid.


Turn right, and take the hallway back toward the Bedchamber. Just before the door, check the drawer on your left for some gunpowder. Unlock the door, and then head back.


To the left of the door, there’s another suit of armor. Smash the case to the left of it to find a crystal fragment. Head through the door back into the Hall of the Four.

When you return to the Hall of the Four, four statues will rise out of the floor. These are the Four Angels’ Busts puzzle.

Head back to the Merchant’s Room to find Duke and save again (if you want). Listen to what Duke has to say — he’ll give you the “Find Dimitrescu’s chambers” objective.


Sell him the crystal fragment and Crimson Glass, and do whatever shopping you need.


Exit the room and head up the stairs to the Main Hall. 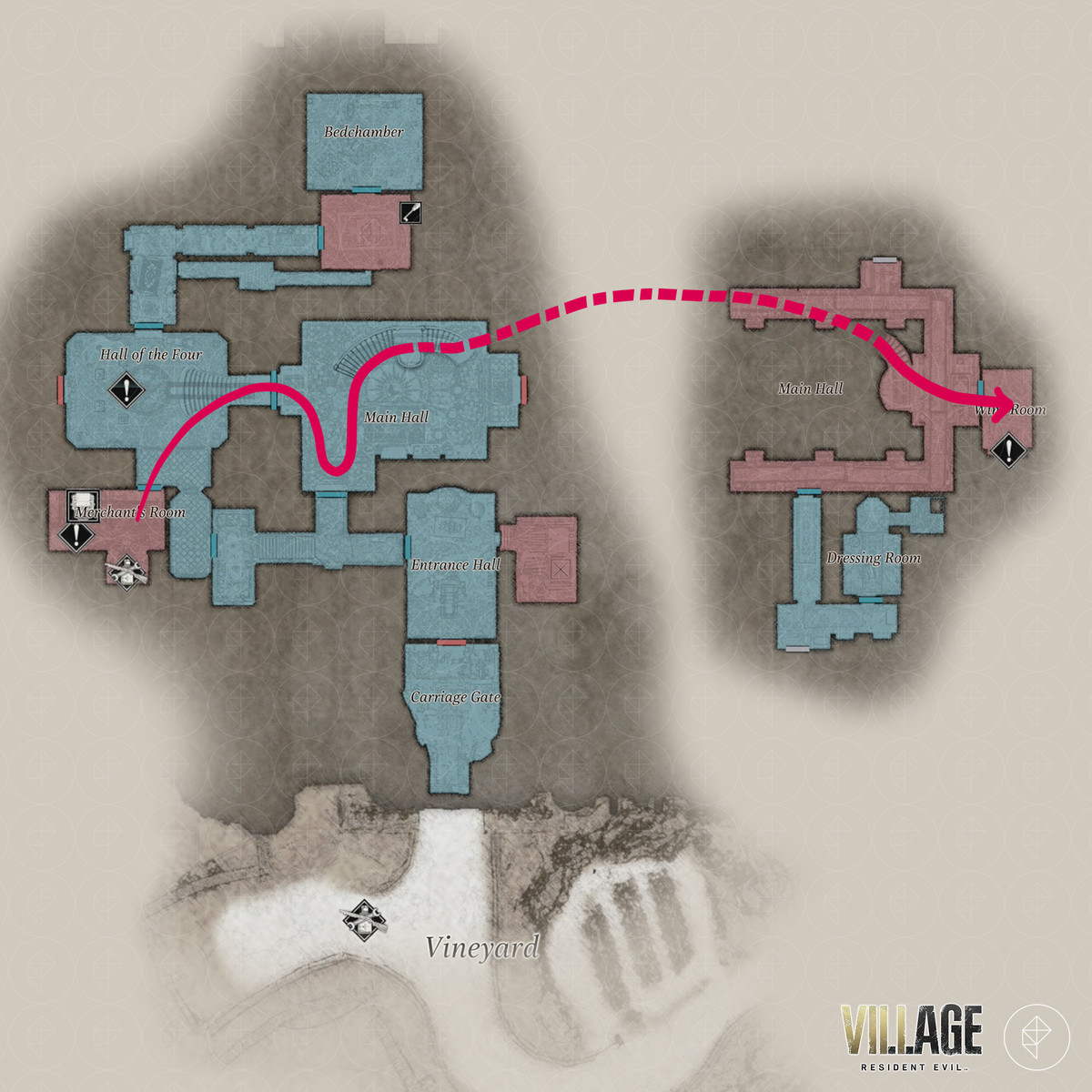 Graphic: Jeffrey Parkin | Sources: Capcom via Polygon
In the Main Hall, turn right and check the drawer to find handgun ammo. Unlock the door on the south wall — that leads back to the Entrance Hall.


On the left (north) side, walk past the stairs, and examine the tea cup on your left (there’s nothing to find — it’s just creepy.) Continue past and smash the vase in the left corner for shotgun ammo.


Take the stairs up.

At the top of the stairs, walk straight into the Wine Room. Grab the chem fluid and the Winemaking History file. The silver(ish) statue in the alcove to the right requires a key we don’t have yet. 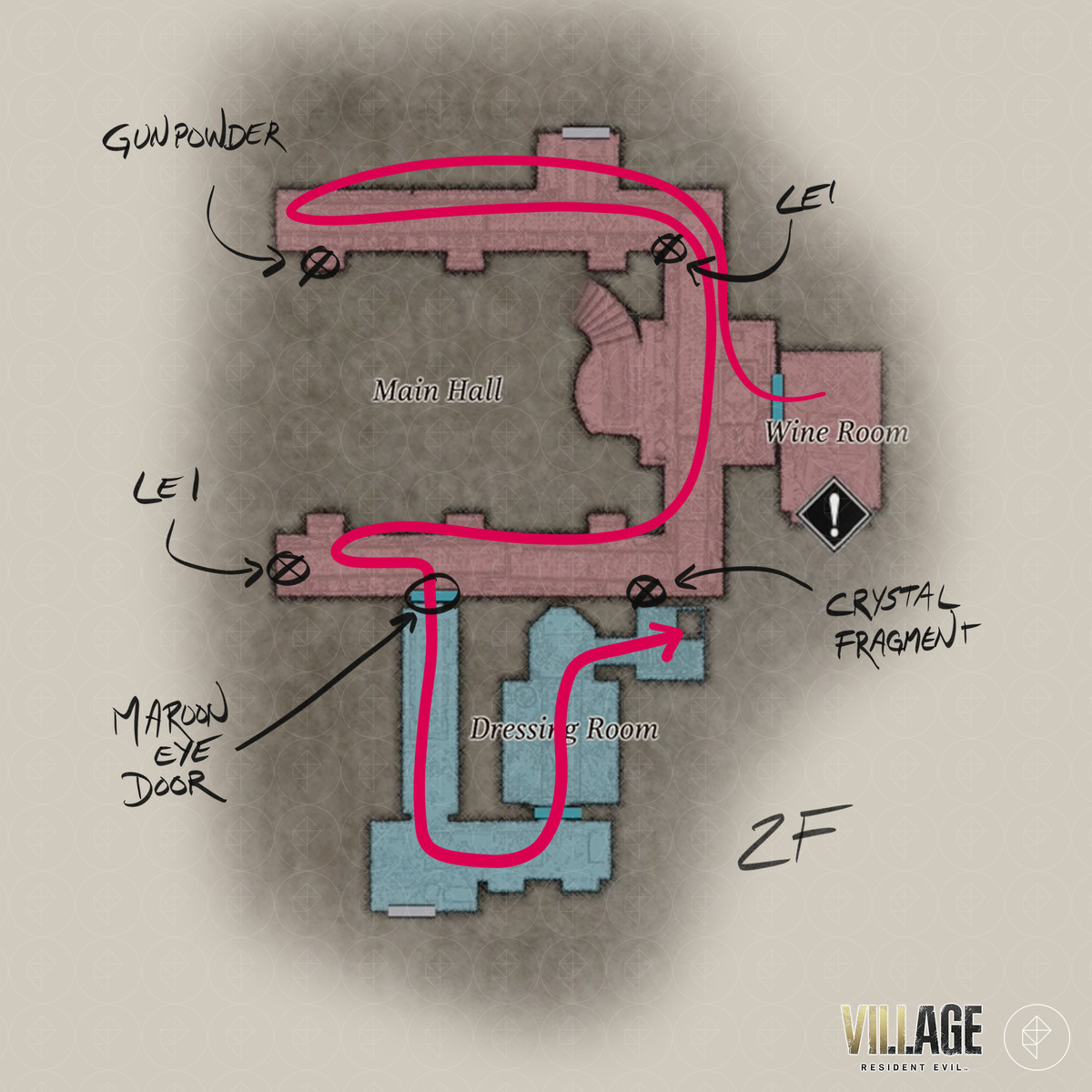 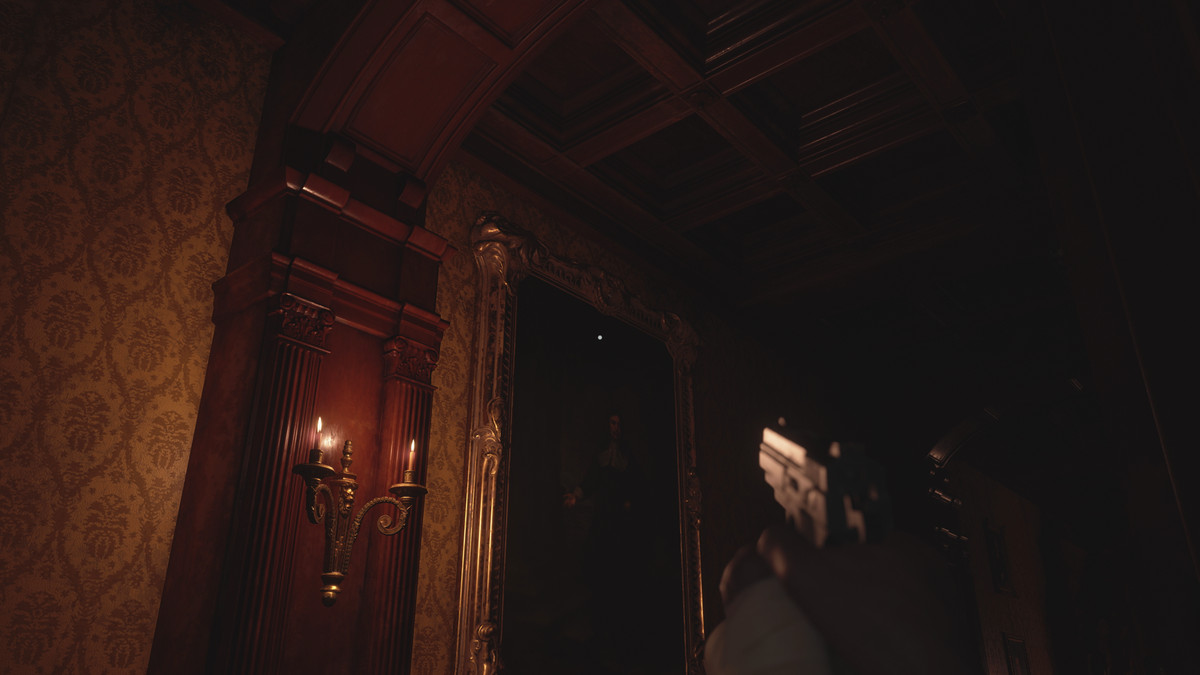 Examine the masked door along the southern balcony, and place the Maroon Eye to unlock it.


One of the daughters will show up, and you’ll have to run away. Follow the hall south, and take two lefts into the Dressing Room. At the back (north) of the Dressing Room, turn right and pull the boards to open a tunnel. Follow it until you fall into the basement.

When you’re back on your feet, check the cart next to the door for a note — the “A Maid’s Diary” file. 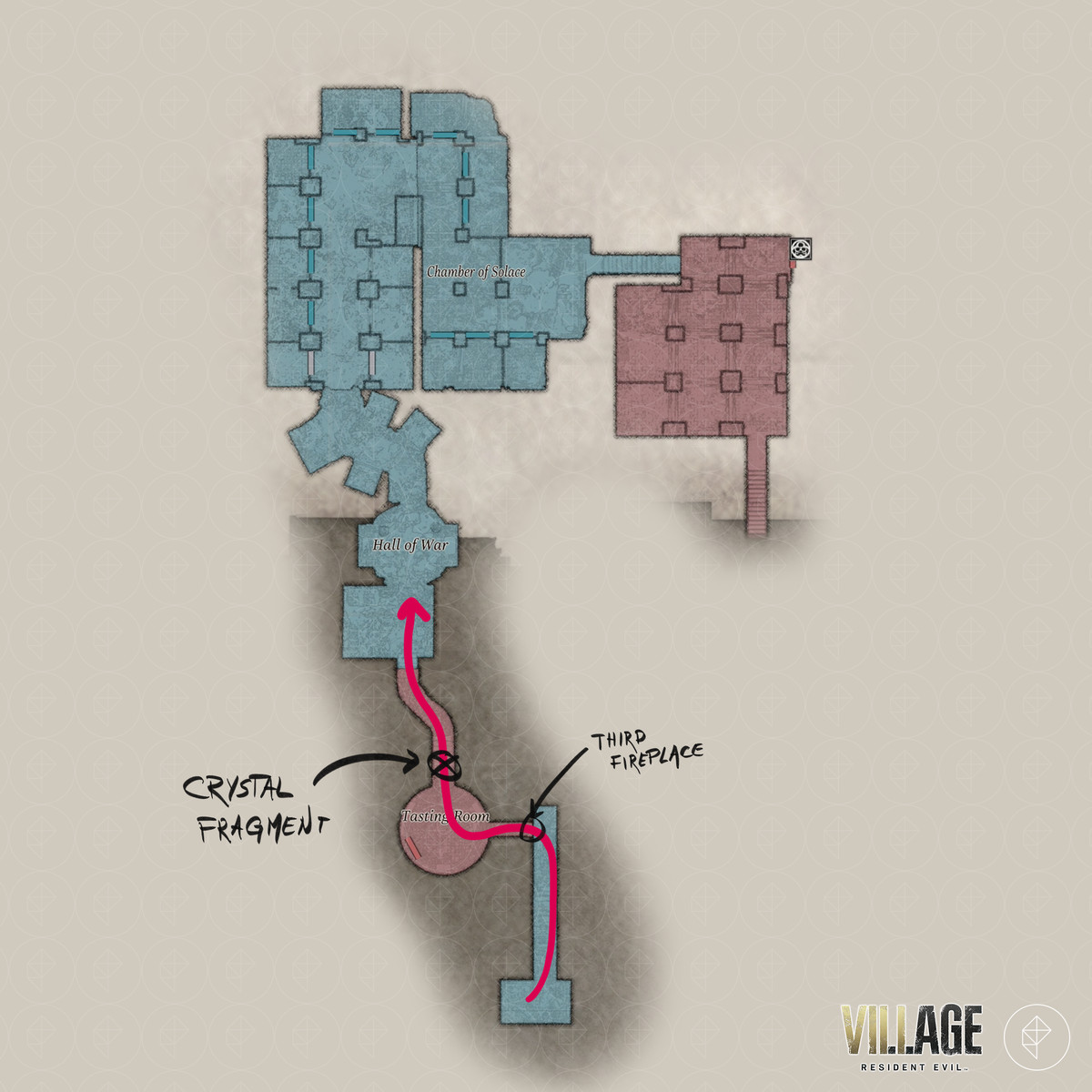 Graphic: Jeffrey Parkin | Sources: Capcom via Polygon
Follow the tunnel down the stairs. Check the first fireplace/alcove on your left for some rusted scrap.


Take the tunnel in the third fireplace to reach the Tasting Room.


As soon as you stand, turn right for handgun ammo. There’s a locked door on the left you can ignore. Before you step into the tunnel leading north, look at the ceiling. There’s a crystal fragment sparkling just inside the tunnel’s shadows. Shoot it down.


In the tunnel, take the first left and break the crate for more handgun ammo. Continue into the very normal round room.


Hall of War, Chamber of Solace​

Turn right to see a “Trust in light” hint on the wall. Graphic: Jeffrey Parkin | Sources: Capcom via Polygon
Sprint at the hanging brazier to push it into the two standing torches on the sides of the room. That will open a door for you.


Walk through the dogleg and past the first few cells — feel free to check them out and take in the ambiance, but there’s nothing to collect until you reach the new room on the map.


Walk forward until your path is blocked. Read the Treatment Candidates file on the cart. Take a left to get past the barricade.


Duck into the cell ahead of you — the third one up on the right side. Read the Observation Report file.


Continue north. When the body drops from the ceiling, turn left. Working clockwise, the next four cells contain: a crate with lei, rusted scrap, and metal scrap.


Head into the next room to the east.

The Chamber of Solace is a dimly lit dungeon, full of sword-wielding vampires and items to collect. 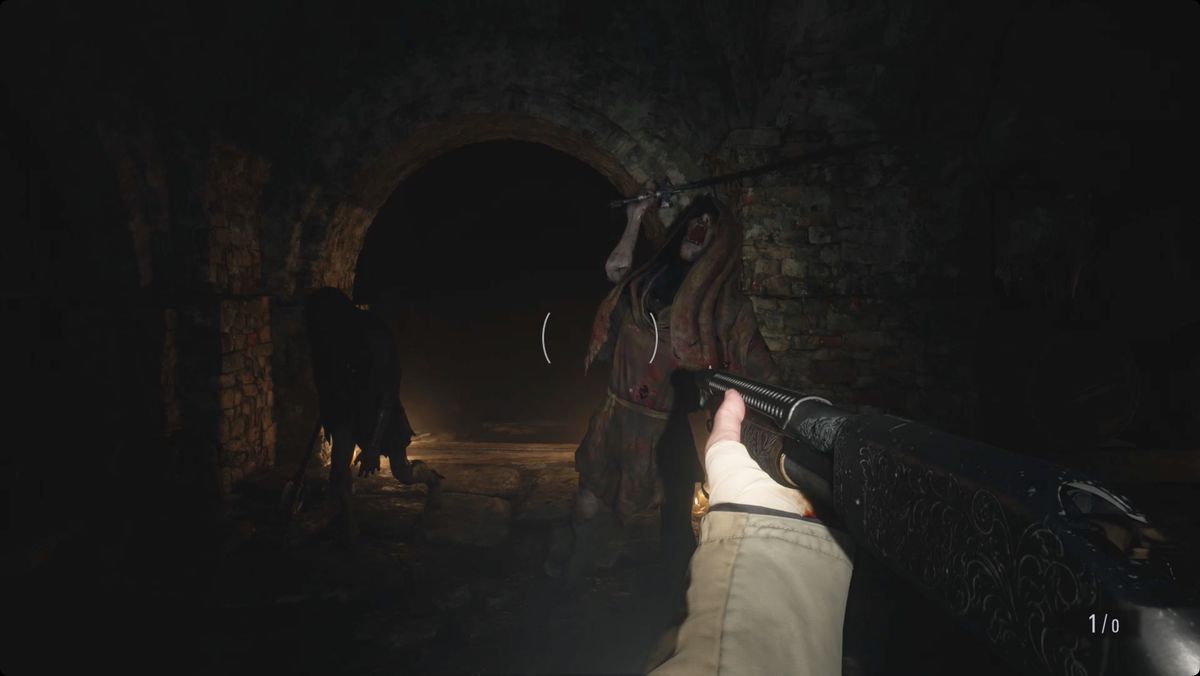 The Chamber of Solace is a dimly lit dungeon. Image: Capcom via Polygon
As soon as you step into the hallway, you’ll meet a few new enemies. Once they’ll handled, step back into the hall. 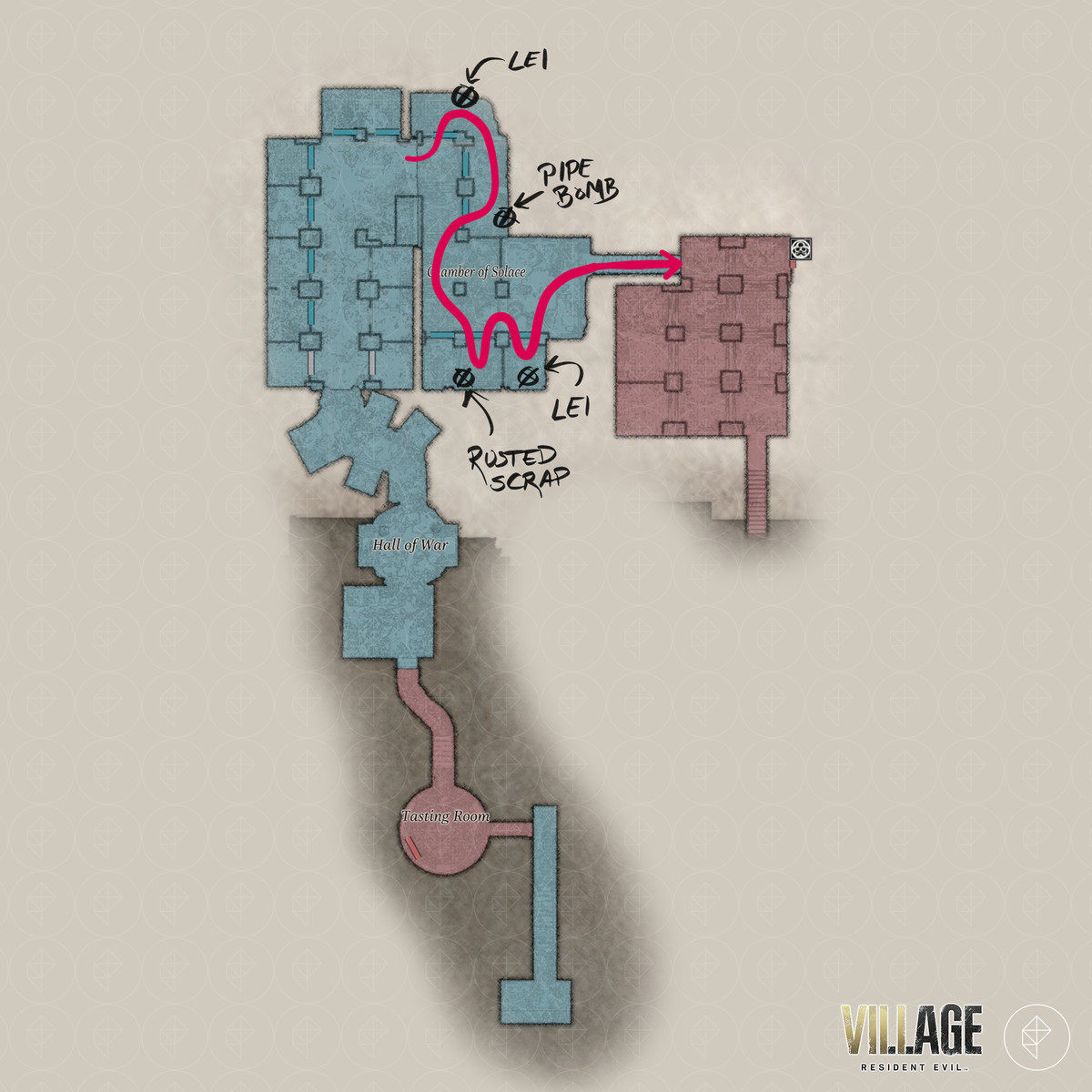 Graphic: Jeffrey Parkin | Sources: Capcom via Polygon
Take a left into the first cell to find a crate with some lei. Follow the tunnel around to find another vampire and a crate with a pipe bomb inside.


Keep heading south. Use that pipe bomb to take out the next few vampires that come at you. Smash the crate on the left for some lei.


Check the middle cell on the south wall of the Chamber of Solace for some rusted scrap, and the cell to the left for a crate with lei.


There’ll be one more vampire to deal with, and then you can take the stairs up until you reach an Iron Insignia Key door. 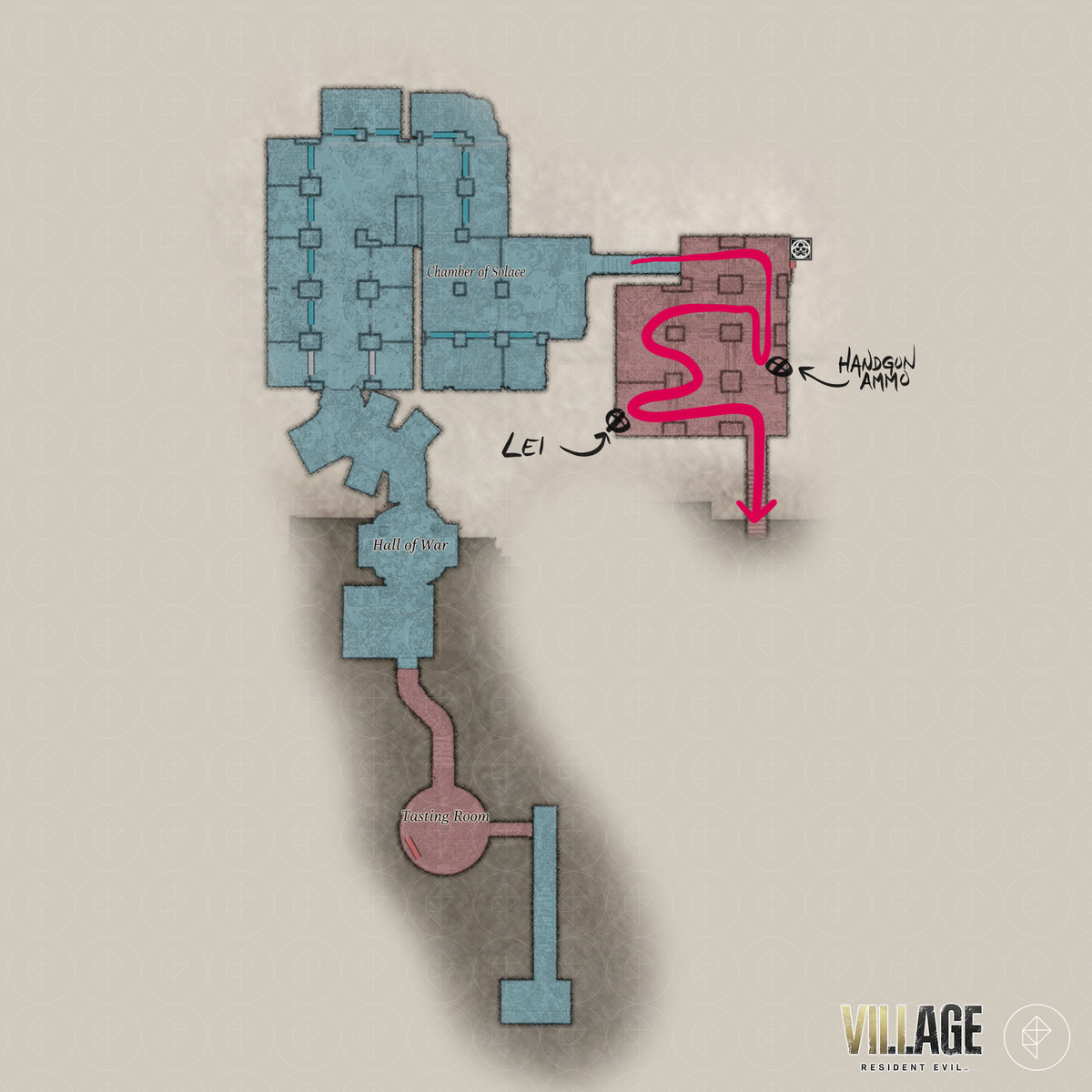 Graphic: Jeffrey Parkin | Sources: Capcom via Polygon
There are two crates in this room, but they’re hard to reach with all the bars and the woman trying to eat you. You can’t do much against her, so just keep moving. If you do get stuck, several shots to the chest and head will make her back off for a few seconds.


The room is laid out roughly like a 3-by-4 grid, so we’ll point you to the crates that way.

From the southwest corner, head east and take the stairs up.

At the top of the stairs, turn left to grab shotgun ammo. Turn around and grab the chem fluid from the barrel in the corner. Follow the hall until you get tossed through the wooden barrier. 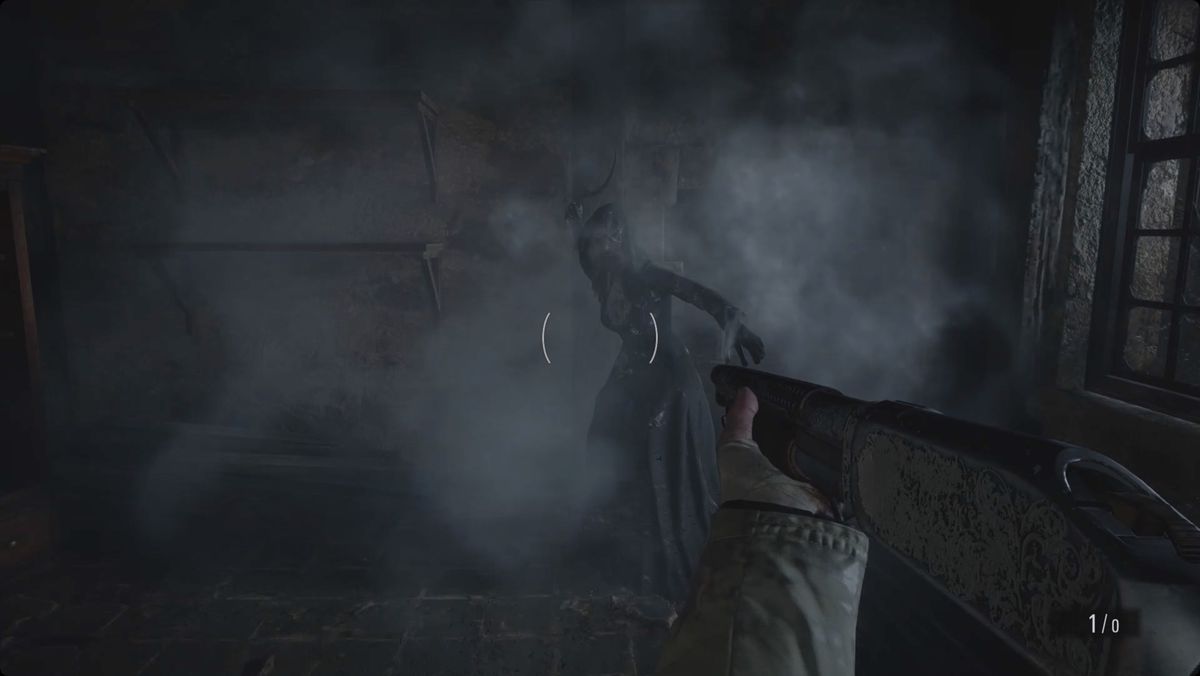 Kitchen boss fight with one of Lady Dimitrescu’s daughters. Image: Capcom via Polygon
When you get control again, turn right and shoot out the other window. Grab the handgun ammo from the table between the windows and more handgun ammo from the shelves in the corner. Just keep unloading whatever bullets you have into your attacker. She’ll eventually turn to ash. Claim her Crystal Torso.